Tonight I felt like keeping up the momentum from doing a couple of songs at the Commodore Grille, earlier in the week. I’m getting my songs under my fingers and into my vocal folds again because it’s been probably been more than half a year since doing an originals gig. So I popped down to Cafe Coco for the Thursday open mic. ‘Popped down’ was a 15 dollar Uber Pool. Coco is down near Centennial Park, which I guess is sort of central, but a little southwest. I live in Inglewood, which is a little northeast of East Nashville. But, to quote myself, “you don’t know how it is until you go”.

I brought my Nord Electro along (story on this acquisition later) because these places don’t seem to want to have pianos hanging around. “Music City”, but go figure! They do open mics on Tuesdays and Thursdays at Cafe Coco, with sign ups at 7. I did some reading on the way there of what must be dated information (http://www.writersnightnashville.com/) because about all these rules were broken tonight. The cafe front is really hip and the draughts looked really cool, and pretty cheap. I was being extra cheap tonight though, and just got a nice handmade cream soda for like three dollars. The dude running the night possibly hadn’t showered for a little while and was dressed like maybe an older roadie way after hours. Nice guy, but that was kind of the first set of signs for how the night was going to go. I signed up and then went for a wander down to Elliston Place, which is full of cool op shops and cafés, and a venue called EXIT/IN, which has this impressive board of previous performers up front. 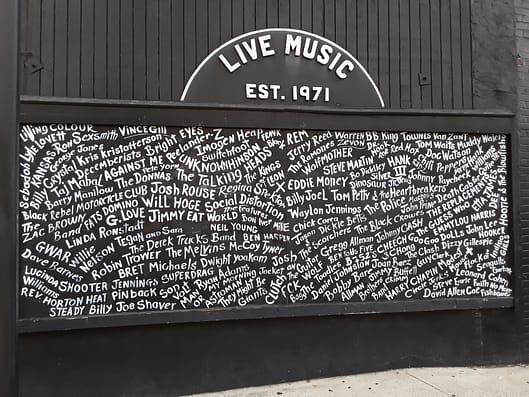 At Buffalo Exchange a flowery shirt that my parents don’t think is cool jumped at me. I haven’t been able to afford to eat properly but somehow could afford this one.

I got back to Coco’s a little after 7:30 and the guy had started it all up early, for about six people in the room. Bummer for the one up first. Real bummer for the one up second, who is this husky powerful 15 year old alto I met at Commodore Grille. So only a few people got to hear her songs. Maybe you can go listen to her though, here! (www.instagram.com/kiraseverymusic). The highlights after Kira were a fifty year old man using some kind of Casio keyboard drums and singing like Billy Corgan over some cool chords that were too loud. Not being facetious about the cool chords. Then there was a man who possibly had some mental issues (and so I won’t post the video) because he strummed some non-chords while singing/speaking “liar”. He cussed a few times and shared biographical information. A couple of ladies sang some decent songs and one guy had some interesting song ideas. He seemed to be really trying to connect with everyone else after his set.

So my turn came around and I set up as quickly as I could. The host guy didn’t seem to mind the crunch of jacking in and out without muting the channel after every single performer, but he was otherwise helpful. ‘This Is How We Begin’ and ‘Really Missing Mary’ (https://open.spotify.com/track/0qMAsxEkbmx04VlKDmJyiU?si=NUQiFZGDTTG1dSw1YzuBFg) were the children I chose to bring with me tonight and they showed pretty well. I got a few positive comments about my voice afterwards, which I found surprising. Perhaps I’m communicating more emotion these days because my pitch definitely wasn’t perfect. Can’t say I’m used to the Nord yet but my little spiels for songs are coming out with less um’s and New Zealand Mumble than they used to!

I stayed a little longer because it’s not cool to just leave after people have listened to yours. We had the host of the Tuesday night open mic come up and read from a lyric chart and make various mistakes. We had some bad tuning on stage, and some table drumming from the host during someone else’s songs. Also a half-finished song. These were definitely prohibited contributions. “Am I the only one who did the reading?”. I did a little more reading/redditing and it seems like Coco went under new management earlier this year.

It was nice to perform, and to feel like I’m ‘getting out there’ and ‘doing it’. Not everything is going to be great but one of the coolest things I’m finding about this place is that there is so much going on that if you miss one, or you tank, you can get right up and go to any of the next ones.